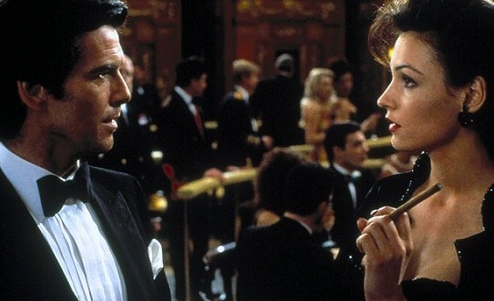 Bond approached the elegant, fashionably dressed young lady, who was looking ravishing underneath the light cast from the great crystal chandeliers high above the green baize of the main gambling table. He kept himself within her peripheral vision so as not to startle her, he didn’t want to be seen to be invading her personal space.
Drawing up beside her he smiled warmly and made his opening gambit which, intriguingly unusual, was perhaps a little safe given the brash, ostentatious atmosphere.

‘That’s an unusually large brooch for that style of coat.’
‘Oh, yes. I just threw it on this evening.’ She replied with faux modesty. Then, with a sarcastic tone, ‘You’re an expert in these matters, are you?’
‘Well, no. Not exactly,’ Bond countered, ‘But I do like to keep abreast with certain fashions.’

He then proceeded to rattle out a list of current designers of the day, both independents and those working in the top fashion houses. He couldn’t help himself. It was not the first impression he had wished to make. It put him immediately in a rather effeminate and servile position, confident enough but failing to show the aggressive side of his character. These things were fundamentally necessary not just in his personal life but for any kind of mission.

Bond had always been in touch with his sensitive side, but having these feelings so readily accessible to him meant that they remained dangerously close to the surface whether he liked it or not. Tonight his delicate, artistic nature had got the better of him and he quickly warmed to his subject.
And so, no sooner had he made his first move then he had lost his position of superiority, leaving the ball in her court. It was now down to her whether to shut him down from the outset or try and steer the conversation back.

The look on her face was one of both incredulous disbelief and an instant lack of respect. Who was this poor excuse for a man, bleating on about obscure rag-trade hacks making useless clothes nobody except a few tottering scrawny statuettes would be able to wear?

She had anticipated a night of wild extravagance, picking this majestic setting specifically for the purpose. The premier casino in the richest capital city in the world. She was expecting no less than to mix with the highest class of social society, to rub shoulders with the rich and powerful, hoping to have some of their grandiosity and entitled, elevated esteem rub off on her.
Primarily though, her more base desires were also in need of quenching. Carnal lust and primal urges were further aroused by the obscene and almost indecent level of opulence.

She fantasised about having some initial flirtation to whet her appetite, some outré conversational banter, linguistic foreplay with mysterious, handsome stranger. A man’s man to whom she could surrender with reckless abandon.

Her voracious appetite demanded she have her physical desires satisfied.

They made their way to the bar where Bond, again misjudging the situation, stood rudely waiting, expecting her to order drinks for them both. It demonstrated an attitude which supported gender role equality but at the cost of polite, traditionally observed chivalry. Totally inappropriate, as well as down right rude.

She was by now in need of a stiff drink. A Sazerac for her and an orange juice for him.
‘Neat,’ he added jokingly, knowing that it was a slightly childish drink to be ordering in amongst the adult selection of expensive wines and hard liquor. ‘Rocks?’ the barman answered in playful reply, ‘No it..’ Bond cut himself short, ‘thank you, no. Just as it is.’
His hesitation was to avoid embarrassment from the barman, but he turned back to his drinking companion and explained.
‘Ice can cause all sorts of problems, you know. It cools the drink but even that’s a short lived benefit. It soon melts and the water itself, usually common tap, can harbour all sorts of germs and bacteria. One wouldn’t normally drink it, unless it was from a dependable drinking water supply, so why should it be consumed any other way?’
Thinking back to past missions overseas where he had been exposed to many of these unseen water bound dangers, he went on, ‘As well as dysentery, gastroenteritis and a whole number of other nasty diseases, there’s always the possibility of foreign diseases. Malaria, typhoid, these are all carried in the water supply, maybe not here in England but they are all carried the same way.’

Her eyes were glazing over, this is not what she had had on her agenda. The night was still young. She craved the attentions of hot-blooded, fiery, passionate, assertive men, excitedly anticipating the thrills such frissons would invariably lead to. Her voracious appetite demanded she have her physical desires satisfied by dominant assertive men, quite often more than one and allowing herself to eventually be taken to the limits ecstasy.
And tonight was no exception, just her average weekly highlight to let off some steam.
Her first thoughts had been that she liked him. On the surface he appeared a chivalrous, attentive gentleman, possibly even a potential lover. Certainly he was attractive and seemed well to do. The sort of man she would call on to pass the time of an evening spent dining lavishly, perhaps taking in a show, followed by a night’s passionate lovemaking, more sensual rather than savage. Sometimes that was more what she needed. A gentle stopgap from the usual barrage of bullish male company.

‘…So that’s why I always use a water filter when I’m at home,’ Bond’s rambling small talk was drifting in and out of her lascivious reverie, now that she had lost interest.
‘Hmm.. really.. that’s nice,’ she would mutter absentmindedly.

It was a slow night at the casino tonight, not many of the men seemed worth the time or effort. They were either old, bloated duffers who were almost certainly incompetent, or too young and inexperienced, gung-ho in their conquests and peaking too soon, unable to last the night. Still, she was determined not to go home empty handed and for this reason she decided to give Bond a (third and) final chance.
Putting his teetotal drinking choices aside she persevered with a new topic of conversation.

‘So, you’re obviously a gambling man James.’
‘I like the odd flutter but I’m certainly no high roller. To be honest it’s just a bit of fun for me.’
‘Well there’s nothing wrong with that. We’re all partial to a bit of casual fun, aren’t we. Competition aside, do you enjoy playing games?’ She smiled at him mischievously, wondering if he’d play along with her flirtatious conversation this time.
‘Certainly. As long as the stakes aren’t too high.’ His mind was still innocently on sport while hers had nimbly moved on to consider her own desirability, the extent of her female allure.
She mistook his reply as a backhanded compliment, thinking it a reductive comment about herself. How rude!
Before she had time to react to his apparent insult Bond continued..

‘I’ve always found gambling to be rather a fierce sport. Sure, it can be dressed up elegantly enough and played in fine surroundings such as these, but at it’s heart the ultimate objective is still the same. Taking down one’s opponent by any means possible, financially crippling him.’

‘True. But isn’t that the whole point?’ She could feel herself growing more exasperated.
‘I guess so, it just all seems so merciless. Frightfully ungentlemanly. Brings out the killer instinct in oneself.’
‘Go on,’ maybe there was hope for her yet.
‘Yes, well I mean there’s something terribly ferocious about it all, a wildness. Surely you know what I mean.’
‘Oh yes. Yes I do, I find it simply thrilling! And do you like wild things Mr Bond James Bond?’
‘Not as a rule,’ he replied, then paused. ‘Actually, I tell lie.’ Missing her suggestive innuendo completely he carried on with his weak prattle.
‘I simply adore whole foods and I’ve just started incorporating a lot more raw foods into my diet actually. It’s quite interesting, I’m reading a fascinating book by Herbert Shelton…’

Again her eyes started to glaze over and she gave an inward sigh. After all her efforts she finally had to admit defeat.
Making her excuses she left him to his own devices and moved thankfully away, on the prowl for her next prey.