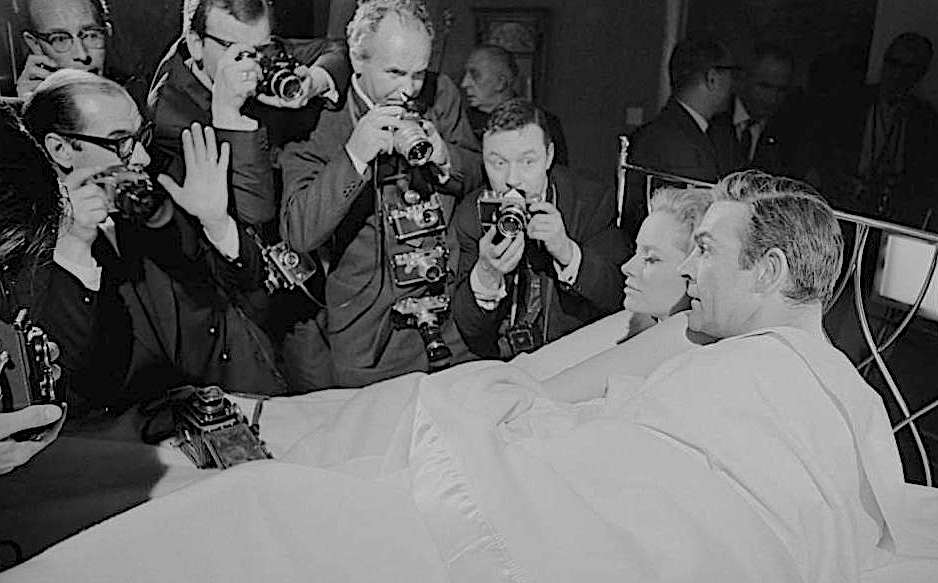 James Bond did not feel even slightly the worse for wear, instead he woke this morning with a clear head and a lightness of heart. He reflected on the night before, some highly needed recreation during this period of inactive duty and office work between missions.

It had been a typical evening spent at Blades, his favoured club. He had dined on an exquisite meal, the Chef de cuisine was acknowledged as one of the best in London, and followed it up with a few games of bridge. Nothing too excessive, too much excitement and stimulation lead to ones judgement being clouded, which in turn could easily cause one to act irrationally or, worse, inappropriately.

So instead he had chosen to play only low stakes rubbers, any further risk or reward would have to be found elsewhere. He was still human after all, and was easily seduced by the attractive and alluring female contingent in the room, their beautiful figures moving elegantly, with jewellery that glittered flatteringly under chandelier light.

To round the night off, with the promise of fulfilment by a warm and perfectly formed aperitif, he had taken home a rather striking middle-aged blonde who now lay next to him in bed. He stretched out luxuriously, allowing the memory of her to linger tantalisingly in his thoughts.

Failing to arouse his unresponsive body she turned away with an exasperated sigh, pulled herself out of bed and, rather haughtily, made a show of lighting a cigarette in a last attempt to gain his attention. Puffing away angrily she started to dress. It was quite clear that the moment for any potential morning liaison was long gone. Band sat up and watched her impassively, quite oblivious of her need to be ravished one final time before the day claimed her, pulling her back into reality and the humdrum routine of life.

It was close to the end of the morning when Bond arrived at the unobtrusive offices of ‘Universal Export’. Heavy grey clouds showed no signs of clearing before the day was up. They seemed to have invaded the sky already, before the sun had even risen. A light drizzle of rain was just cold and damp enough to warrant (its) added inconvenience to the scurrying commuters underneath, already soaked to the skin and still hours away from a lunch break. Even here in Park Lane, a usually classy, even breezy looking area of town, there was no covering up the grim, soggy reality of a dismal day in the city during late autumn. Streams of businessmen swished hurriedly along the pavements, cowering under their bowler hats and umbrellas.

The female workers moved with equal haste while trying to maintain some degree of demure composure, teetering on their inappropriate heels, skirts billowing. Still, they were more sensibly dressed than they had been during the preceding summer.

Over those few hot months Bond had noticed the increasing visibility of exposed flesh, as the skirts and sleeves shortened, exhibiting bare legs and arms to the delight of the men, young and old, happy at the opportunity to ogle them appreciatively.

Bond was concerned with this new fashion trend. He worried that it crossed the line into overexposure, masquerading as progressive liberation. It was an attitude particularly prevalent of the younger generation who rejected the staid, more reserved behaviour of their elders.

But the abundance of this notion they called ‘free love’ seemed to Bond an undesirable titillation one would be cautious of encouraging in men whom he knew only too well would take advantage of an easier and more salacious vantage point.
He was all for female equality and freedom of expression, more so than most of his peers, in fact. But these new actions, even though they might reflect the admirable intentions, seemed not to empower but rather objectify further, under the stiff, patriarchal cultural oppression.

Having reached his offices he surveyed the sea of glum faces coming and going.
Here came one such lecherous animal now. Disguised in a bowler hat and buttoned down pinstripe suit, a man looking far older than his years was the quintessential picture of respectability.

The superficial expression of chaste impassivity.

Bond immediately saw through the superficial expression of chaste impassivity. It was his job to notice people’s hidden motivations and true character, a skill at which he flattered himself.
From a professional distance he preferred to point the finger at other’s misdirected pent-up longing, and was rather less willing to recognise it as a refection of his own self.

It shamed him to admit he could be, at heart, down at the same human level as other red-blooded males, unapologetic and remorseless of their physical needs and desires for carnal lust.

The mere thought of it suggested a violation towards the fragile, puritan virtue of female innocence. He found it abhorrent, the notion of there being any latent desire, indeed a physical need, to take and ravish by means of domineering male entitlement.

As a man with greater empathic sensitivity he felt a duty to respect these values, ashamedly deploring the sexually biased society, of which he was a part. Bond was not naturally proactive in these matters, preferring to be led, passively shifting the initiative onto his partners, those who were patient enough to do the work in order to satiate their own sexual appetites. Otherwise he would rather stick to his own abstemious rationale.

Was it really that important to him to be perceived in this way, or was it in fact that he did not fully trust himself?