You never take me to dinner, period. 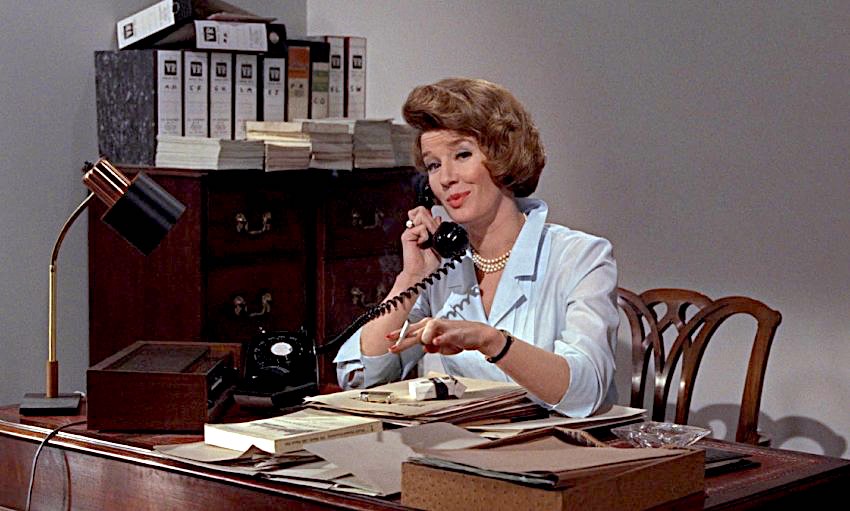 It was a particularly tiresome morning for Miss Moneypenny, M’s personal secretary, who was steadily wading through reams of files, reports and various other items of interdepartmental bureaucracy. She glanced up at the clock on the wall of her small room, outside her boss’ main office, and let out a loud sigh, as if she expected the hands to have moved any faster than they had only minutes ago.

The day already seemed interminable. No missions to pass along, no dangerous or salacious testimonies to write up, no double-0 section traffic flowing through for meetings with M, the head of the secret service, to whom she was unconditionally loyal and respecting of. Right now though, her total commitment to the service notwithstanding, she would honestly rather be back home, in her slippers, sipping tea and listening to her Barry Manilow records.

With these comforts in mind she sighed again, put her head back down and continued ploughing through the mountain of paperwork piled up on her desk which didn’t seem to be diminishing.

From the moment Bond walked through the door her frown immediately softened to a smile, her spirits lifted and she felt the warm relaxed familiarity of his presence. The nonchalant swagger, the easy air of confidence, she knew all his subtle mannerisms so well and found them uplifting and reassuring. It reminded her, on this particularly dull morning, how much she welcomed this distraction whenever he was summoned to the office.

His visit was especially welcome on a miserable wet day like this, a grim stretch of having to toil through boring and uninteresting administration. But her boredom soon turned to pleasure with his arrival.

Throwing his rain drenched bowler hat onto the hatstand, Bond smiled and walked over to greet his favourite secretary in the service.

‘Morning Penny,’ he said, giving her a polite peck on the cheek. He noticed that she too was still not completely dry from the journey into work, the damp patches on her clothes showing clearly which areas she hadn’t been able to protect from the rain.
‘You’re the perfect image of a water nymph if ever there was one.’

She scowled playfully at him, anticipating the customary mischievous banter. Theirs was an almost familial relationship, based on trust and respect, enough for a deeper level of ribbing while recognising and respecting each other’s emotional boundaries. Taking the initiative she took the stance of the aggrieved damsel, adopting an affronted tone of voice.

‘James where on earth have been all morning? I was soaked to the skin by the time I got here, I’ve needed you to warm me up and lavish me with attention.’

‘Sorry Penny, I had trouble tearing myself away this morning. Anyway, I thought M asked maintenance to install an extra heater in here for days like these,’ he added, shutting down her overture in a heartbeat.

Ignoring the invitation in her eyes he reflected instead on the much needed hot breakfast he had allowed himself extra time to enjoy that morning. May, his devoted housekeeper had prepared him a steaming bowl of porridge (made from Scottish oats, naturally), cooked slowly overnight and loaded with fresh berries. It was important to keep up his intake of antioxidants in this inclement weather. He needn’t have spent quite so long indulging himself but he had given in to the warmth of home comforts.

Noticing Moneypenny’s expectant gaze on him still, Bond quickly pulled himself out of his reverie and picked up from where he had left off.
‘Well, better late than never eh? I know how essential your favourite agent is for your wellbeing.’
Moneypenny smiled hopefully.
‘Not that you need any help for me of course. That smile of yours could surely warm the entire department for an eternity.’

This was more like the James she knew and loved. The handsome face coupled with a friendship which ran deeper than just the professional. It was evident in the provocative repartee which had blossomed over the years. Nothing too lewd or suggestive, just cheekily brazen enough to maintain office boundaries, though his sense of propriety far exceeded hers.

She considered herself enough of a friend to mock him endearingly for all his moments of flustered awkwardness when the badinage got too racy for his sense of decorum.
Theirs was an almost familial relationship, based on trust and respect, enough for a deeper level of ribbing while recognising and respecting each other’s emotional boundaries.

Yet while he kept higher moral standards of light but repressed flirtation, she longed for more, much more. Her passion overran the witty exchanges and into the realms of physical lust and the yearning to be owned, taken, devoured by this exceptional specimen of a man.

‘Just one of my many attributes, James. My talents are limitless, so I’ll forgive you just this once for not seeing it sooner.’

‘You know I’m in constant awe of your talents, Penny. It’s just sometimes easy to lose track. Anyway, that coat seems like it could hold off a thunderstorm.’
He indicated vaguely towards a voluminous but chic duffle coat hanging up on the stand.

‘Oh, my goodness!’ He exclaimed suddenly, noticing his hat above which had steadily been dripping water all over it.
‘My hat, I didn’t think. As if your delightful coat wasn’t already wet enough! So sorry.’ He darted over and moved it quickly down to a lower peg. ‘So sorry.’

The spell was broken. The intimacy of the moment fizzled out sadly and professional normalcy was once again restored.

Moneypenny smirked forlornly, enjoying his prim, growing discomfort. Although finding it frustrating most of the time, there was also some pleasure to be derived from his spluttering embarrassment when he found himself dancing a bit too close to the edges of professionalism, the double-entendres landing excitingly over the mark.

Oh, Damnit! she thought to herself. It wasn’t worth the effort, she hadn’t the energy nor inclination to pursue it further. She would have to seek her jollies elsewhere in the department, where there was no shortage of other appealing men willing to play.

It would not be the same, but she realised she would get nothing further out of Bond today. Having reached a certain level the moment of frisson, as she had known it inevitably would, had gone, extinguishing any chance for any further warmth and affection from the unrequited love of her life, the only real manifestation of her fantasy.

Grudgingly she resigned herself to the joyless day ahead.