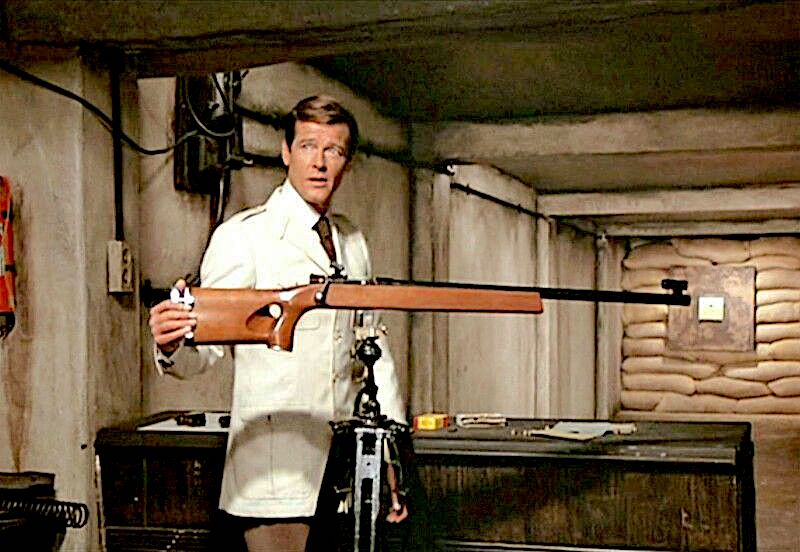 It was a beautiful morning in late autumn. The air was crisp, fresh and still, and there was not a cloud in the sky. The landscape seemed suspended in time, the living world preparing to close down for the year, preserved in the icy grip of winter.

James Bond, in his open top Bentley Mark IV, motored south along the motorway out of London. He loved this time of year. The romantic inside him very rarely failed to outshine any trace of stoical cynicism, and on this occasion he was feeling nothing but an encouraging joy and appreciation for being present in such a precious moment.

As he passed through the outskirts the urban landscape gave way to vast expanses of verdant countryside, the roads gradually beginning to narrow and the traffic slowing to a more relaxed speed. Here Bond felt less self-conscious, less threatened, ambling along overcauciously at a snail’s pace, even on the big roads. Frequently he’d heard and tried to ignore the offensive blast of an angry klaxon horn before being overtaken by an indignant motorist, leaving him and his own underused, overqualified car in a cloud of of dust and fumes.

Hooligans! he thought. Road hogs with a blasé attitude towards road safety and the courtesy for other road users. Young, hot-blooded virile, posturing men with a wild streak and competitive attitude, qualities that were lacking in himself and of which he had no wish to be burdened with anyway, thank you very much. All that aggressive, thrusting energy, a constant need to show ones self as the dominant force in any given situation. The typical ‘alpha male’. It seemed so exhausting. Better to keep ones life on an even keel, to be gently carried along on it’s own preordained passive wave.

The typical ‘alpha male’. It seemed so exhausting.

With these thoughts his mind turned to the day ahead. He was glad of the early start, a necessity given his slow speed, to reach his destination in ample time for an essential part of his training.

Yet under the clear blue sky a cloud hung over him. It was the thought of this part of his job which he actively hated but knew was absolutely essential. It was unnegotiable, and today it had come around again to that time where he must immerse himself within the harsh, violent world of which it was a part. The loathsome exercise in question? Target practice. Today he would have to fire a real, loaded gun.

At M’s request Bond was due his regular visit to the Centaury Firing Range at Bisley. Here he would go through a comprehensive workout of his own and additional firearms. An extensive, meticulous procedure which included not just the basic functions of firing (precision, accuracy etc), but also maintenance, physical support (such as posture and stance) and any other aspects to help achieve maximum effectiveness of the discipline. Being a large part of his profession, these things were of primary importance.

He hated guns. Noisy things with one single inhumane purpose. On the few occasions he had needed to kill, it had taken several months of therapy, following post traumatic stress, to straighten himself out. These sessions, naturally, had to be done on his own time and out of his own pocket, it would not do to let M or anyone else in the service know of its effect on his fragile state.

He drew up to the Range with a sense of anxiety and foreboding. Even from the long driveway, looking out and seeing in the distance several other firing sessions in progress, he was already wracked with dread. There were also a few female field agents here today, some of whose faces he recognised. They were regulars here too, motivated by a need for acceptance and respect by the male members, a misplaced belief but it helped fuel their tenacity.

All of them outclassed Bond. They were made of considerably more mettle, consistently showing him up on the range. It was a further embarrassment, as if his natural lack of ability weren’t enough.

‘Morning Spud,’ said Bond cheerily as he entered the pavilion, ‘It’s been a while.’

Corporal Menzies forced a smile and returned Bond’s greeting. ‘Morning sir. It certainly has, I noticed your name on the register for this week.’
He had seen it all right, and dreaded every moment leading up to it. Bond was the worst shot out of all the double-0’s, perhaps even the most useless in the whole of the service.
Menzies found his sessions with Bond exasperating to say the least. As the Chief Range Officer it was recognised as a mark of respect that he had been singlehandedly assigned this task. M had seen to that personally. He was the best, unmatched in proficiency and mastership, which was why he trusted him so implicitly for the tutelage of his most valued agents.
But, after years spent patiently instructing Bond, there was simply no improvement. Menzies considered it a personal blot on his otherwise immaculate results record. Just his luck to get lumped with him first thing this morning. It would put a dampener on the rest of the day.

First item on the agenda was to polish up on his skills with his everyday gun of choice, the beloved Walther PPK 7.65mm. Over the years he had grown to tolerate it with the same grudging acceptance as his previous Beretta.

‘And try not to blink this time.’
‘Ah yes, sorry. I’m always doing that. No matter how many times you tell me…’ he made light of the acknowledgement, rolling his eyes in mock forgetfulness.
Menzies was not amused and, ignoring the comment, went on with his instruction.

The morning dragged on. Menzies’ will to live was rapidly waning. In a vain attempt to relieve his boredom he kept swapping over different weapons for Bond to try, playing for time with each changeover.

‘Right sir. Let’s maybe try you on this one next.’ He handed Bond a large Enfield sniper rifle with a large variety of various scopes and target sights attached. It was Menzies’ desperate hope that the additional paraphernalia would increase the chances of making Bond’s aim true. Even if he managed to occasionally hit the target would be an improvement.
‘Tuck it right into your shoulder,’ he said, manhandling the butt of the rifle against Bond’s body. How could a man of his calibre be so inept? It boggled the mind.
‘Now, finger on the trigger. No, here. Relax your hand but keep a firm grip. That’s it.’ For the umpteenth time he talked Bond through the most basic of steps.
‘My goodness, it’s got some weight to it,’ exclaimed Bond. Menzies said nothing. This was one of the more lightweight rifles, good for practice, but then most of the more effective models could each weigh at least three times more. All the other double-0 agents could adeptly handle any of these weapons more than adequately. Their licence to kill status made it mandatory. Bond was seriously lacking in every respect of marksmanship, and although he accepted his uselessness, made no significant attempt to further his knowledge and discipline of the skill. He thought it a cruel, vulgar aspect of his job and hoped, unrealistically, that he could get by on his few other less violent talents alone.

‘My goodness, it’s got some weight to it,’ exclaimed Bond.

Eventually, after a couple of rounds firing at easy, static targets, with a pathetic score tally, none of his shots coming even close to the bullseye, Menzies could take it no longer.
‘Let’s leave it there shall we sir? That’s enough for today.’ Before he had finished the sentence he was already snatching at the rifle, prising it out of Bond’s tense grasp, with the same impulsive desperation a distraught mother might rescue her baby from a burning building. ‘We’ve put in some hours today, that’s for sure.’
He made of show of looking at his watch, as a further signal to end the session. There was technically still just under an hour to go but his patience had reached its limit. He wanted to get to lunch and be done with the morning’s interminable fiasco. The whole rigmarole had been excruciatingly awkward, as usual. Later, back in the pavilion, as was his custom, he would curse M, the cause of his sufferance, venting his ire upon any poor soul who had the misfortune of being in earshot. Yes, that was enough for one day, he simply could not take any more. Neither could Bond, but for quite different reasons.

Politely they made their brief goodbyes, swiftly parted company and went their separate ways.